The halt pose is one of the most popular and useable poses. It is required for Dressage and all conformation shows and accepted in many others.

First off, levelness is the most important thing if you want to show in Halter because an unlevel pose is automatically disqualified. In all other disciplines, levelness is nice but it's not as important. So, if you just want to do In-Hand or Dressage, you can try for level poses but just focus more on getting the horse straight with a nice head, ears, and expression. You might even get it level on accident!

Levelness refers to how the horse is standing. A level horse's front right hoof and back hoof will be in line with each other. You should be able to draw a completely flat line from the bottom of the front hoof to the bottom of the back, like this: 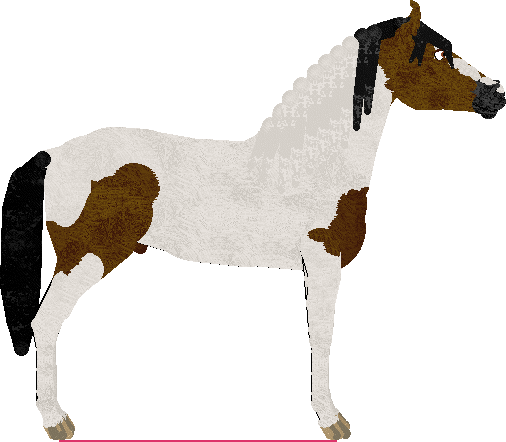 With an unlevel pose, the line will NOT be completely flat, like so: 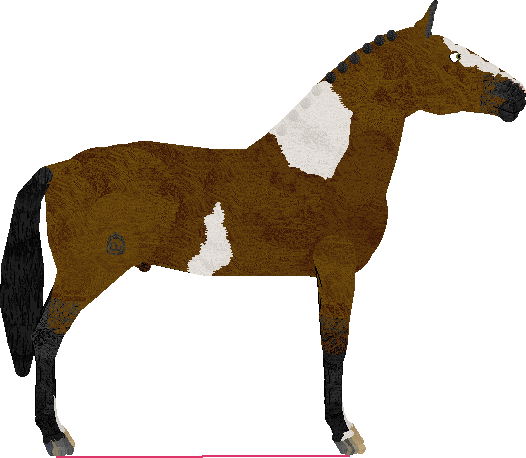 An unlevel pose like the one above is close enough to level and has good enough eyes/ears/head etc. that it would still show well in everything but Halter.

Body alignment and levelness are kind-of related, but also not. Body alignment refers to whether the legs are straight and lined up and whether the 'shading' of the texture on the horse is consistent from front to back. All four legs should be as long and straight as possible and the front legs should line up almost exactly except for the hooves and ankles. The back legs on most mods do not align perfectly, but they should be within a couple pixels of each other. The horse below has excellent alignment and straightness in his legs.

Unfortunately, a horse could be standing perfectly aligned but the body shading could be different anyways because the horse has moved around a lot and the game hasn't 'reset' the texture yet. I actually created Petz 4 hotkeys (which you can download at Reverie) purely so I could 'restore colors' very quickly during my posing sessions to help with that.

The horse below has a really nice pose except for the body shading. The black on his rump and face is lighter than his stomach and chest area, yet he is standing perfectly aligned! This is just an issue with the game. Don't get too caught up worrying about the shading, as long as the legs are aligned and the horse is level, it's not likely to be faulted much (or at all) for body shading issues like this. (Nor for the hole in his face haha poor guy, it's the mod!) 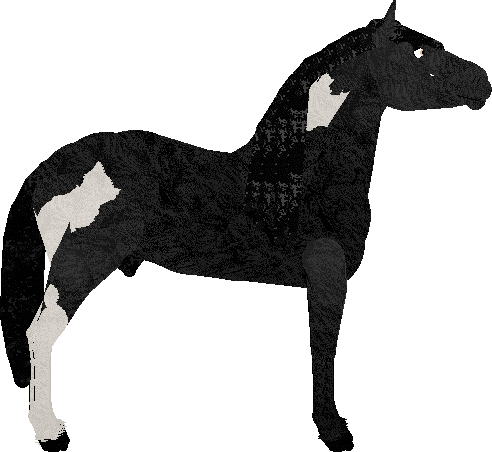 Head alignment is like body alignment but for the head. Ideally, the shading from the back of the head all the way to the tip of the muzzle is consistent. Some people hex the muzzles to be darker or lighter shades though, so it's sometimes harder to tell. However, on the horse above you can see his cheeks are the same shade as his muzzle and so he's set, nice straight head!

However, on files that have a two-sided forelock, you would want to pay special attention to the forelock to see if you can see any of the left side poking through in the front, which would indicate the head is turned a little.In the below examples, the first horse has a nice straight forelock and you can't see any of the far side, whereas with the second, you can see she's got a pixel of the far side sticking out ahead, so her head is turned a little. 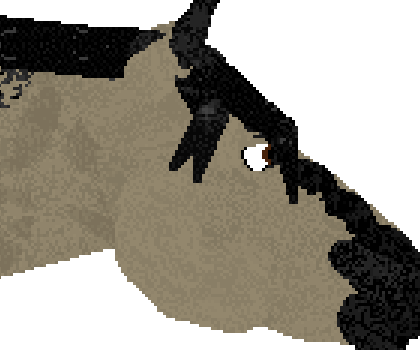 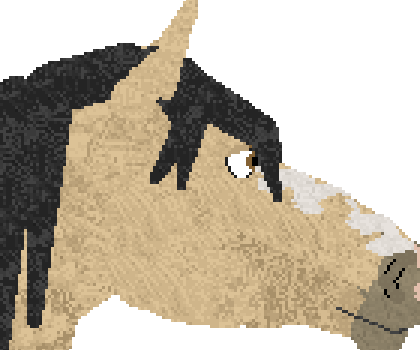 Ears are tricky and probably the most annoying to get right - at least for me! However, nicely aligned ears are going to be as small as possible and in most cases, rather pointy. The horse below has some nice small, pointy ears! 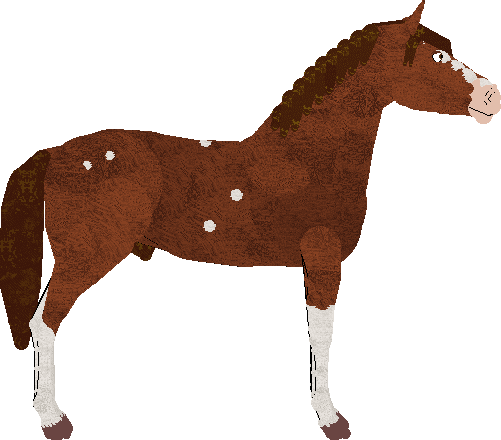 However, quite a few breeds/mods have larger ears - so pointy isn't possible. In that case, you want to just see how much of the far ear you can see. Seeing some of the rounder base of the far ear is okay, we're more concerned about the top and upper sides of the ears and how they line up. Ideally, you can't see very much of that far ear, besides the base, like the horse below. 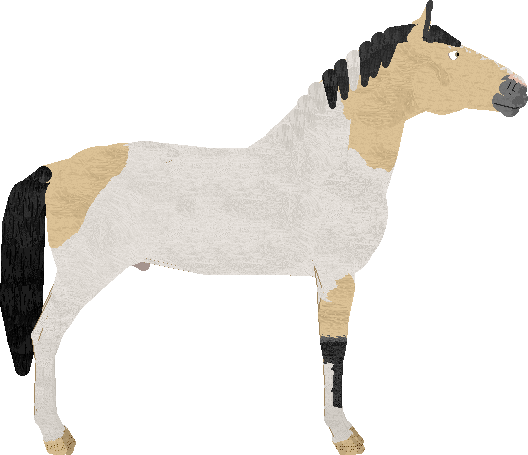 The eyes ALWAYS need to be looking straight ahead of the horse. The pupil needs to be centered on the iris. If the pupil is pointed upward or downward or the horse is looking at the camera or just zoning off into space, the pose will be disqualified or heavily faulted.

The expression of the horse should be neutral, like the examples below. Any worried

eyes (little-to-no eyelid) will be disqualified or heavily faulted. 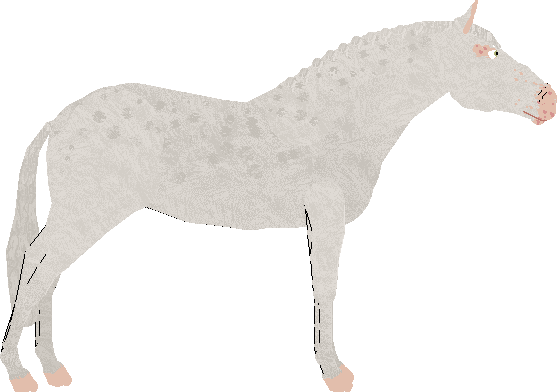 I just want to emphasize that the eyes below are prefectly fine. Sometimes people see that they are slanted and assume they are worried - they're not! Worried eyes are even more slanted. 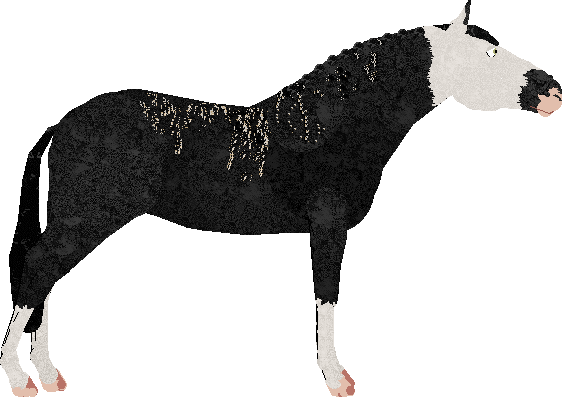 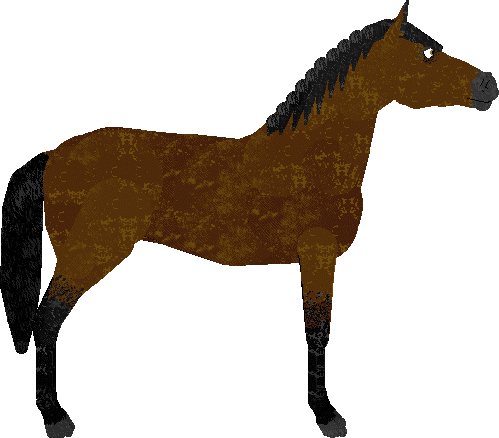 Eyes like on the horse below (under the tail category) are okay too, where the pupil and iris are not as visibile. It doesn't look as good, but as far as the pose judging goes, there's no faults or anything related to it.

The tail should ideally be laying straight down between the back legs, like all of the poses you can see above. If it is swishing, it could throw off the levelness of the pose because the legs bend so they're not completely straight (and also may affect the body alignment). It's not too important to worry about, but just know that a nice flat tail is ideal.

Rowan's tail is swishing a bit, his is very slight but it was enough to make him level in this pose even when he was actually not standing fully straight. 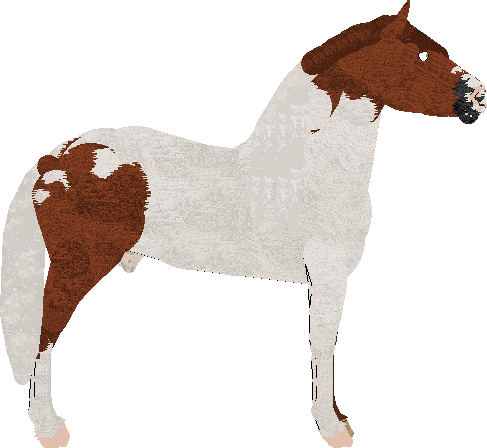 For even more detail and examples, please visit the Official Halter Guide by Angora.

All poses are best obtained in Petz 4 using the playpen area. You also want to make sure your petz photos are going to autosave, because you will be holding the spacebar down to take lots of photos as quickly as possible!

You will also need a toy or two to use to distract the horse to get it to look forward. A box of treats, a box of seeds, or a scratching post seem to work well, because they don't seem to get too excited over those but they will look at them. It may be beneficial to also just set that toy on the ground and let the horse interact with and get used to it for a minute before putting it in your carry case and working on posing.

You're going to have to pick up and set the horse down a ton of times until you think it's standing straight on. Generally, I try to look at the head of the horse as it's spinning while I'm holding it, guess when the eyes will line up, and drop it at that moment. Once it's on the ground, you can look at the front legs and see if they seem to be pretty lined up. If so, you quickly pick up your toy from the carry case and slowly wave it in small circles in front of them and HOPE they stand still and look at it. You're going to need to hold the spacebar down while you hold the toy in front of them, so that you take as many pictures as possible.

More often than not, the horse will not stand still and will take off running or do a jump, maybe it will 'spook' as you start taking pictures, or it will start posing like a dog does... Either way, just keep trying and eventually the horse will react better to the camera. If the horse spooks or starts posing like a dog, just wait until they stop and be ready to hit the spacebar again. If they stay aligned, there's no need to drop the toy or move them. If they move, then you'll need to re-align them. It might also help if you pet their shoulder right after you set them down, to keep them from automatically running off. That's what I do, but I have no idea if it actually helps.

Below is a short video I did of how to get most poses. The gaiting poses take up the first ~2 minutes while the halt pose is the last ~2.5 or so. You might want to watch it fullscreen on YouTube because you'll see more details that way.

Once you think you might have a good halt pose, you can open it up in Paint or another image program and check to see if it's level by drawing a line from the bottom of the front hoof to the bottom of the back. Don't forget to look at the body shading, ears, and expression of the horse as well. A level pose does you no good if the horse is sleepy, worried, looking anywhere but straight ahead, or has a crooked head or wonky ears.

I think Paint is a free Windows program, and to check levelness in it, you would:

Open the image in Paint
Select "Line" from the shapes box
Change the size to the smallest width
Zoom in a bit and draw a line starting from the bottom of the front hoof to the bottom of the back hoof
If the line is completely flat when you zoom out, then it's level. Hooray!

One important thing to note is that quite a few popular breeds and mods are not level. In the case that a horse is on an unlvel mod, you can either attempt a halt pose where the horse is aligned straight on and the legs are even, but the pose is unlevel, OR turn the horse a bit so that it is not straight anymore but the pose will be level.

There are two examples below. In the first, an unlevel horse is posed aligned straight on and would most likely show well in every discipline BUT Halter. Most judges are aware that it is no fault of the horse or owner that the pose is unlevel, as long as the front legs are nice and straight and aligned. 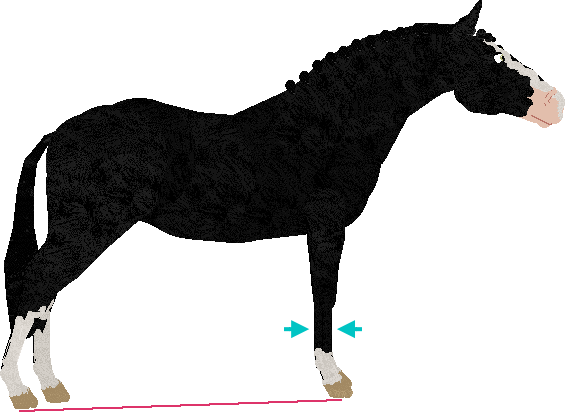 Note that you can't see much of the far front leg but the ankle and hoof. This is a good indication that the horse is aligned well. In the following example, you can see quite a bit of that far front leg, so you know that it is not straight and its hind end is turned further away from the camera. It is level, though. 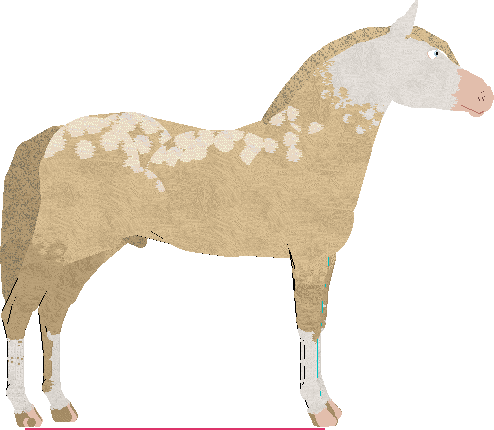 If you want to show an unlevel horse in Halter, you have to turn them so their front legs aren't aligned in order to get them to be level. The cream horse above is a Halter champion and never placed lower than 3rd, BUT it's much more complicated and it takes a lot more time and guesswork to line them up just right.