To hex a horse, you not only need its breedfile and a Petz Workshop "dummy" file, but two hexing programs as well. The first is Petz Workshop and the second is LNZ Pro.

It's a good idea that you already have some hexing knowledge before you attempt a horse file, since regular dogz and catz are much easier. However, if you don't, that's okay, just know all of this will be a little more confusing at first.

The color chart below shows all 255 colors useable by the Petz games. Keep in mind that a lot of the colors from around 229-255 may be different on other computers. Additionally, only the colors 10-149 are texturable colors. Untexturable colors are 0-9 and 150-255. Untextured colors will show up just like you see them in those little boxes, no texture and very flat-looking. They're great for eyecolors and small accents like some skin on a muzzle, maybe even for hooves, but not-so-much in larger amounts.

This chart was made by Osiris from PCG.

And this image is one I made to hopefully help people understand the x, y, z coordinates that the Petz game uses. These coordinates can be seen and changed in LNZ Pro. Changing them is the best way to get really precise with paintballs and addballs. We'll get into all of that later. 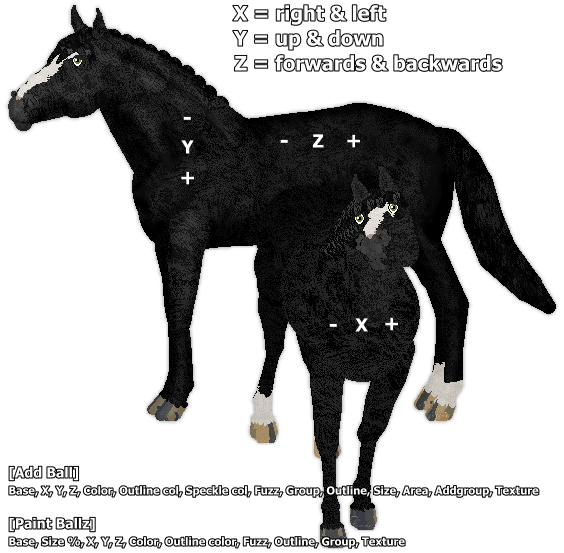 Hexpedia has some really good tutorials and resources available as well, so they're worth checking out!

Brynn is no longer active in the Petz Community, but before she left, she put the tools she had created for the PC up for hosting on Boardwalkerz. That site is gone now after the owner decided to let it go, which left Brynn's tools without a home. Her spot generator is often called the "auto-spotter" and it will generate any number of random paintballs. All you do is input how many paintballs you want on each ball, the ball numbers, the min and max sizes of the paintballs, and other info.

NOTE: Paintball sizes are a PERCENTAGE of the ball they are placed on. A size 10 paintball (10%) on a very large ball like a horse belly will be very large compared to a size 10 paintball on a horse's snout. If you want more uniform-looking spots from ball to ball, don't just input every single ball number and generate the paintballs all at once, group balls by their size first and only do one group at a time and change the min and max sizes for each one.

If you would like to play around with it, you can download it here. The program does not need to be installed, you can just stick it in a folder somewhere and open it up whenever you're looking to generate some random paintballs. 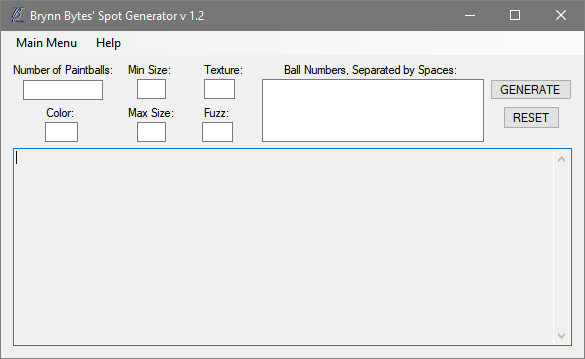 Brynn's anchor utility will automatically texture and anchor paintballs if you paste them in. You just copy and paste in the paintball code from LNZ Pro (paste into the tiny window on the left) and then it will give you textured & anchored paintballs in the big window. Copy and replace the original ones.

If you would like to play around with it, you can download it here. The program does not need to be installed, you can just stick it in a folder somewhere and open it up whenever you're looking to texture and anchor a large amount of paintballs. I personally rarely use it because I only add paintballs about 10-20 at a time, and it's quicker to do it manually, but it will come in handy if you've added a ton in PW all at once. 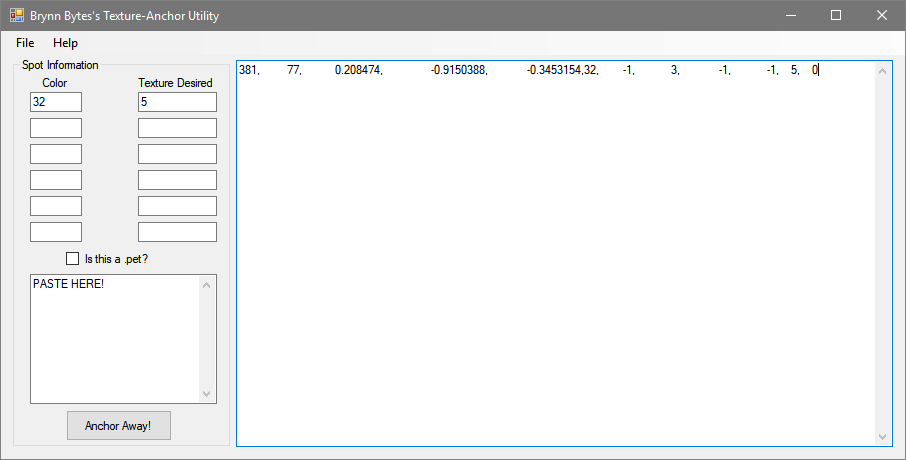 These are already BMPs, so you should be able to just right-click and save!

Texture: jewellzcremello.bmp
Transparency @ 0 (looks best when set on a lighter color, like 10 as apposed to 19)
Modeled by: Delight (using Celestia's jannet64 for mane/tail) and Audaz

Texture: jewellzginger.bmp
Transparency @ 0 (looks best when set on a darker color, like 69 as apposed to 60)
Modeled by: Ember and Barry

Texture: jewellzdarkbrown.bmp
Transparency @ 0 (looks best when set on a darker color, like 99 as apposed to 90)
Modeled by: Nike

Texture: jewellzdarkblueroan.bmp
Transparency @ 0, 20, or 110
Modeled by: Humphrey (transparency @ 20 on 115 color base)
Works nicely as a blue roan or a dark grey depending on the base color and transparency you use.

Texture: jewellzbrowngrey.bmp
Transparency @ 0 (looks best when set on a darker color, like 109 as apposed to 100)
Modeled by: Flashbang

Texture: jewellzgrey.bmp
Transparency @ 0 or 30
Modeled by: Illusion (transparency @ 0 - also uses my darkblueroan texture on a grey (25) base with transparency 110 for the dapples)
I haven't tried it yet, but if you use a base color 110 and a transparency of 30, it might be a nice lighter blue roan.

There are more textures created by members of SS posted in the Free Textures thread. There's just a rule that they can't be posted anywhere else.

These Manda horse outlines might help you plan out your next hex or a custom horse request.