Since the horse files are so large and complex, they don't breed like regular petz. I mean, you can breed them together pretty easily, but they're pretty scary looking. I accidentally bred one with a Manda V2 file in and I thought I broke the game!

NOTE: Before breeding any horse, make sure it's a good idea. Most members at SS wait until the horse has a Champion title or two before breeding, and if you got the horse from someone else, they may have a rule that it needs to be 'champed' first or you may need to seek their permission.

However, if you're all set and your sassy showing mare is ready for a baby, read on!

When breeding horses, I HIGHLY RECOMMEND you make sure that the 'Great Dane.dog' file in your Petz game is either the Breedable Manda V1 file (which you can download in the downloads section) or the original Great Dane file. None of the files are going to give you the perfect-looking baby but we just want one that won't be too creepy.

IF either of the parents have the 'trotter' gene (like the dog trotter gene that Sheepdogs have) then you will want to breed with the dog-style Great Dane file in if you want the chance for the trotter gene to pass on.

All bred foals are STILL hexed. You breed the parents using a compatible file, then you hex the foal on whichever breedfile you want, then adopt a horse from the Adoption Center that's the same sex as the foal, this is a dummy foal.

So now you have the real bred .pet file that doesn't look right, and a dummy foal that looks right but has no pedigree. 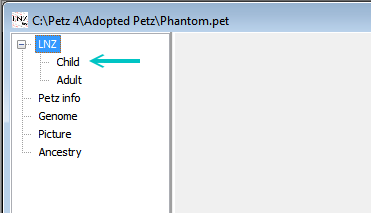 Save the bred foal that's had all its code replaced, then open up the game, bring it out (and hopefully it looks fine!) and hit 'restore original colors' in the Petz menu, and send it back to the abyss through the petz door. You send it back through the door so that the eyelids and everything will reset and 'save' in the game.

The next time you bring it out, it should look exactly the same as the dummy foal. If everything went well, go ahead and delete the dummy foal. I always feel a slight twinge of guilt doing that.

You're probably curious how exactly you figure out what the foal should look like if the game won't breed true...

You may have noticed that other members keep track of their horse's genetics using codes like ee/Aa/nCr, EE/Aa,Gg, etc. and these codes stand for which genes the horse carries. To be really basic with it, a lowercase letter or an 'n' means that the horse either does not have a modifier on the gene or does not have a second copy. If you want to know what they mean, you can play around on this site to get a feel for what these 'codes' mean.

Assuming you now know your foal's parent's genetics (or at least know what color & pattern they are) you can then use the Coat Color Calculator and input what you know about the parents.

Let's say I want to breed Candore to Regal. Candore is 16.1hh Ee/aa/Gg/nSb (black-based grey with 1 copy of sabino) and Regal is 16.1hh Ee/Aa/nO/nSpl (bay splash (frame)overo). Not all members keep track of hh (hands high) but I do, and in this case the foal would just be 16.1hh like the parents. If they were further apart, I would use some random numbers to decide whether the foal would be closer to mom, dad, or in the middle.

But let's use the Coat Color Calculator to figure out all the possible combinations of genes these two could produce so we can see what a foal could plausibly look like.

We'll input the general information we know. Don't forget that checkbox if they're grey!

Now it will ask if we know whether they have only 1 copy (heterozygous) or 2 (homozygous) or if we don't know (so it could go either way and they'll calculate all possibilities). 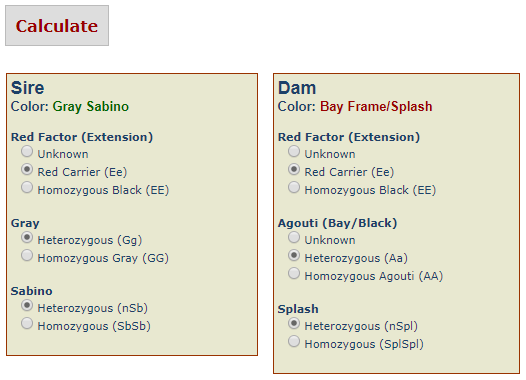 We already knew exactly what these two were so we put that in: Ee/aa/Gg/nSb and Ee/Aa/nO/nSpl and hit 'calculate'! 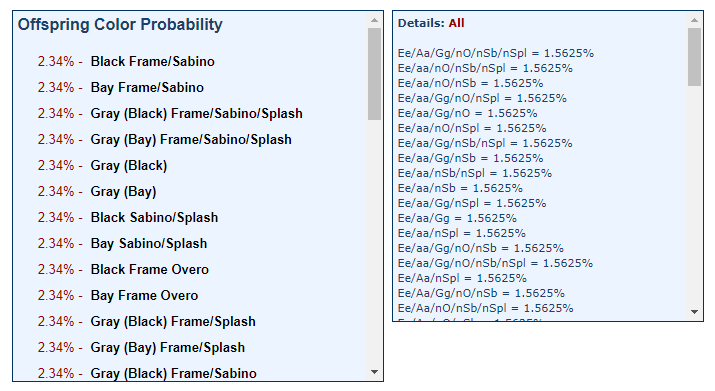 ...Maybe this pair wasn't the greatest to use for an example, that's a lot of variety! How do we pick one? 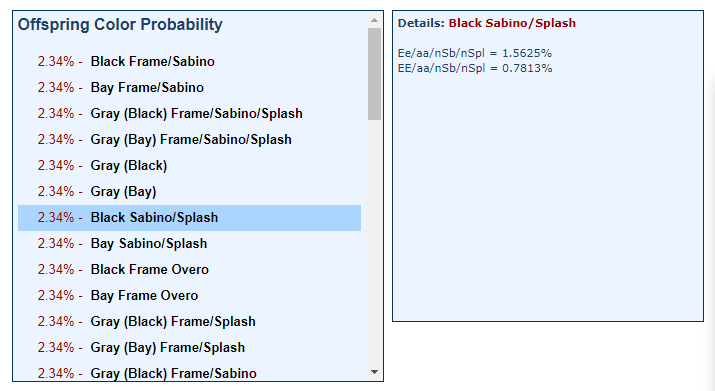 I usually let the Petz game decide on the gender of the foal by whatever type the parents have, unless I really prefer one over the other.

Since these guys are Thoroughbreds, I'd take it a step further to figure out the foal's racing stats and abilities it inherited. You can check out the Thoroughbred Racing Guide to see how you figure out the stats it inherits. I usually just use common sense or random factors to put together what type of racer it will be and which abilities it gets.