Halter is a show based solely on the horse’s pose and not at all on judge’s opinion, which means that it is likely the most consistent show on SS, but also means it is a bit more difficult than the others. In order to pose for and judge Halter, you must understand what we look for when looking at a posed halter horse.

This is set to give an idea of level of faults given to a horse’s pose and may help understand why a horse placed the way it did. Levelness is number 1 because if a horse is unlevel even by one pixel, you are disqualified. However, if you happen to catch a good pose that is unlevel, try it out in In-Hand or Dressage!

There is one exception to this order and that has to do with the eyes. If the eyes are sleepy, surprised, or angry, they are automatically disqualified. Worried eyes are very heavily faulted as well. To learn more about eyes, see below! 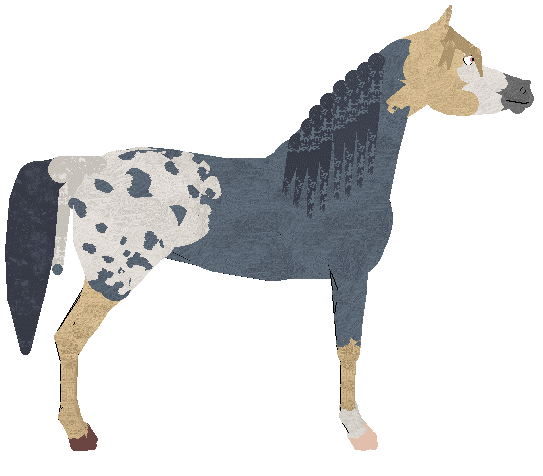 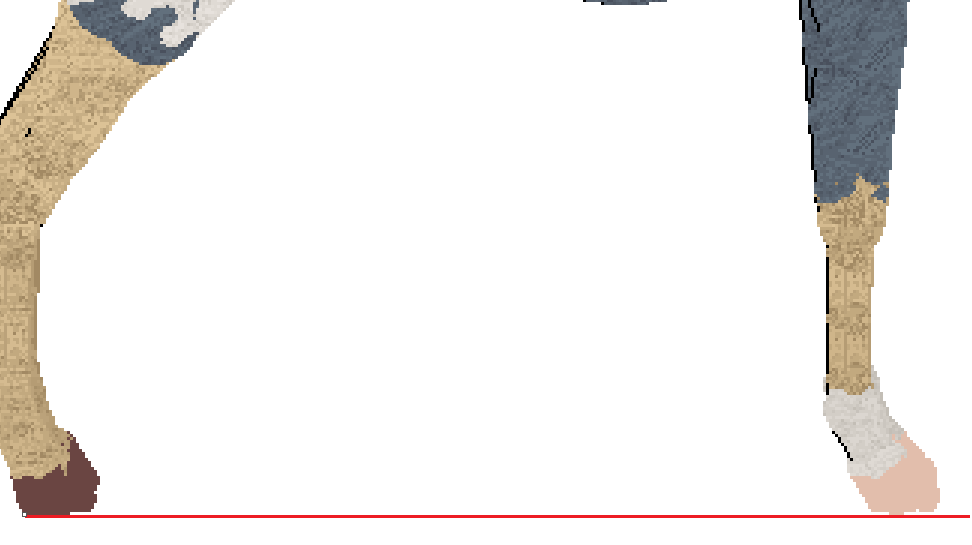 As you can see above, there is an absolutely straight line going from the very bottom of both the front and the back hoof. To check alignment, open up your horse’s pose in paint and use the line tool to draw a line from the lowest pixels of one hoof to the lowest pixels of the other hoof. If you notice on Mariposa’s front hoof, there is hoof and then a little drop about 2 or 3 pixels long, and then it goes up again. You are measuring from the lowest part of the hoof.
The horses below are unlevel horses and would be disqualified. Try to test and see if you can tell that these horses are unlevel yourself! 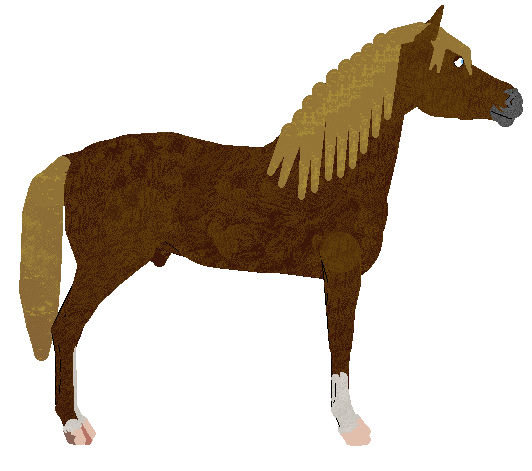 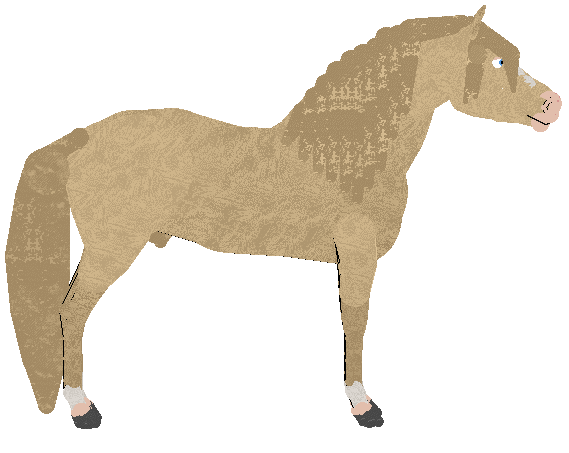 Body Alignment has to do with how straight the horse is standing. It’s better explained through examples! 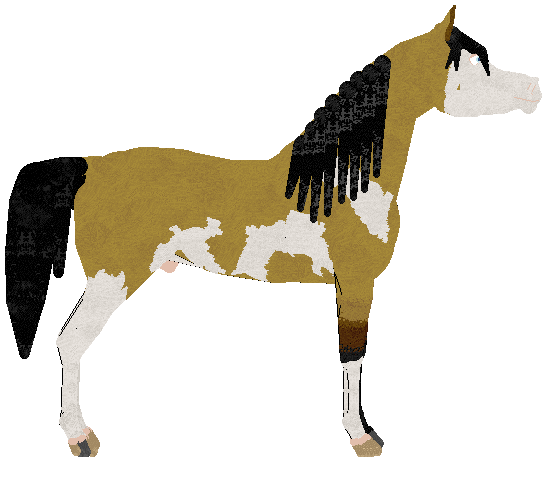 As you can see on Vandal, the shading throughout the body is completely consistent. Basically, you can’t see that the horse is really made up of a bunch of balls and lines. 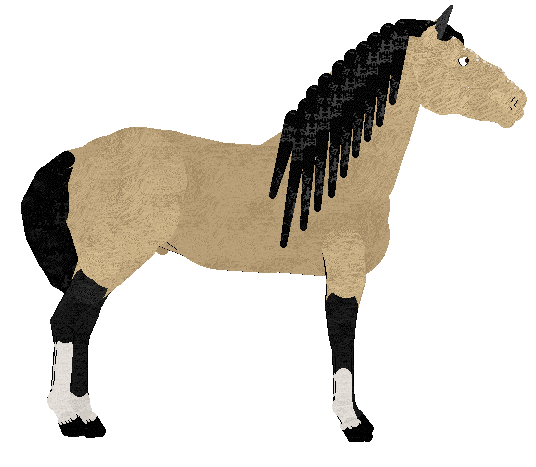 If you take a look at Marcus here (ignore that back leg), you can see that his butt is a bit lighter than his body! This generally means that he is facing slightly away from the camera, and would be faulted slightly. 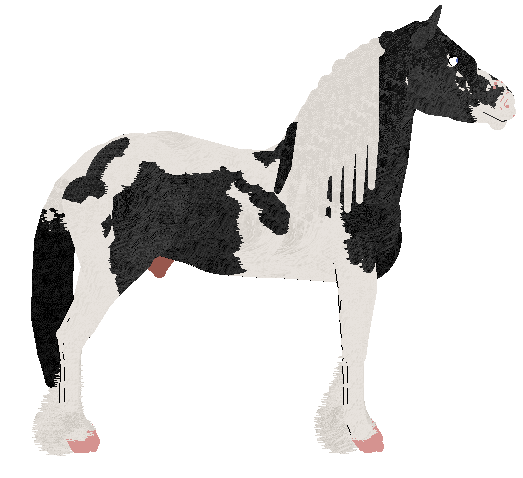 Florian is an example of an aligned paint horse. It may be a bit harder to tell with paints, however you can still have texture differences on the white and the coloured parts.

Another thing to look at when judging body alignment is leg alignment! In most traditional files, the front legs will align completely! 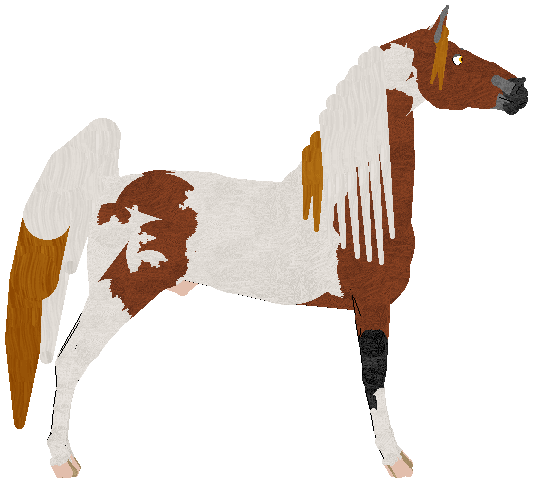 Tonka here has nicely aligned legs! You may be able to see a tad bit of the other hooves showing, but that should be it! 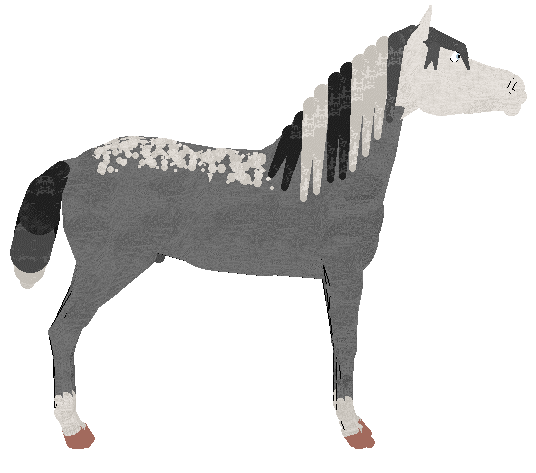 Droid here (and this pose is horrible in general, just look at the legs!) has pretty unaligned legs, and would be faulted quite a bit!

One thing to take into consideration is file type, however, as some files are stacked!

Certain files are modded to have their right hind leg farther back than their left leg. This is perfectly acceptable and is not faulted! Just judge leg alignment using the front legs. Keep in mind that in stacked files, the levelness comes from the back right hoof and the front hooves. Do not worry about that back left hoof, it doesn’t have to be level with the rest!

Head alignment is similar to body alignment, having to do with the alignment of the head. This is determined by looking and judging a few different things. Can you see the left strand of the forelock (though modded forelocks often will not have a left side)? Can you see the left eyeball? Are the ears aligned? Ears specifically can move on their own, so just because the ears are aligned doesn’t mean the head is, which is why it’s important to look at a few different factors. Texture consistency can also be looked at for the head. 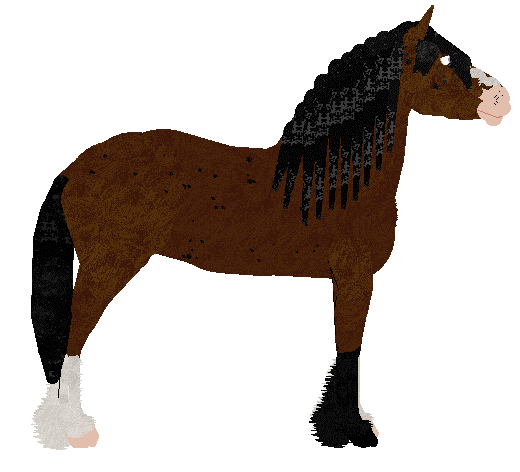 Hazel here has a head that looks straight, and mostly is! However, you can see a few pixels of the left strand of forelock, meaning that it is slightly unaligned. 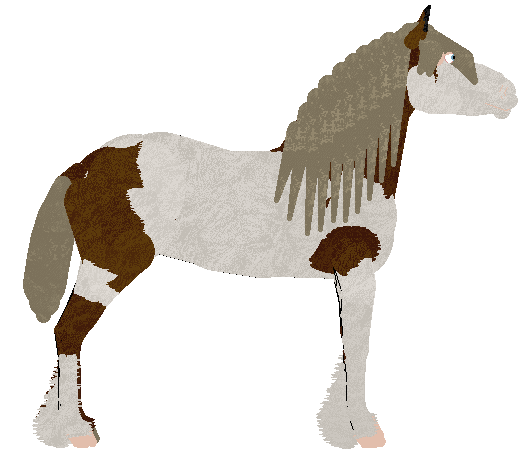 Compared to Deliverance, who has a straight face. 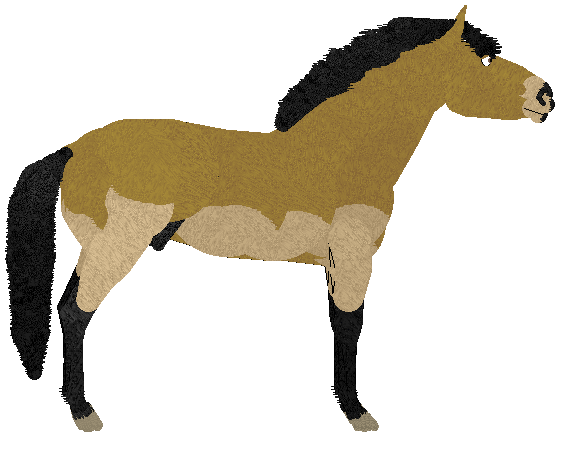 Adlai is an example of a horse with a modded forelock. You can tell his head is straight because the shading of the texture is consistent with his neck and body.

Gunsmoke here is an example of something else to look out for! Files that don’t have forelocks generally will show the left eye even if the head is aligned. If the file you have does not have a forelock and the left eye is showing, disregard the eye and just check the other things for alignment!

Ear alignment is something that can either be easy or very tricky to spot! 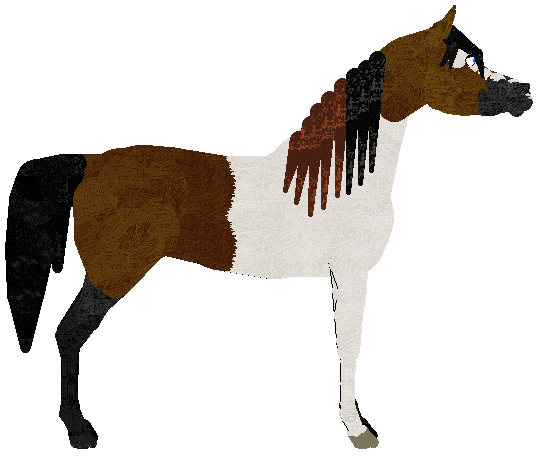 As you can see with Acapella here, his ears looks to be pretty aligned. However, if you look closely you can actually see the left ear quite easily, visible as a very very slightly darker texture on top of the fully visible ear.

Look how nice and pointy Moneypenny’s ears are! They look perfectly aligned to me. 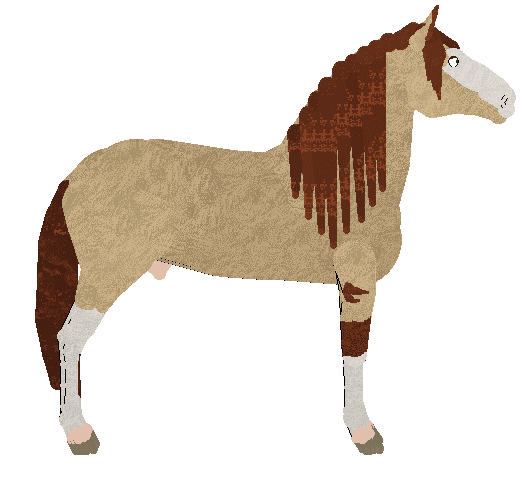 Now take a look at Silas here. His ears look pointy right? Well, technically you can see the left ear! See that piece of mane being his ears and how it looks like it’s going into the ear? That’s because it’s actually going between two ears! These ears are fairly decent, but that would get faulted a slight amount.

I’ve mentioned before that sleepy, angry, and surprised eyes are all automatic disqualifications, no questions asked. 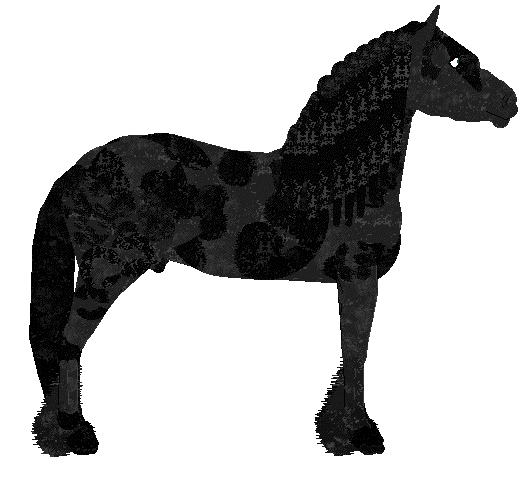 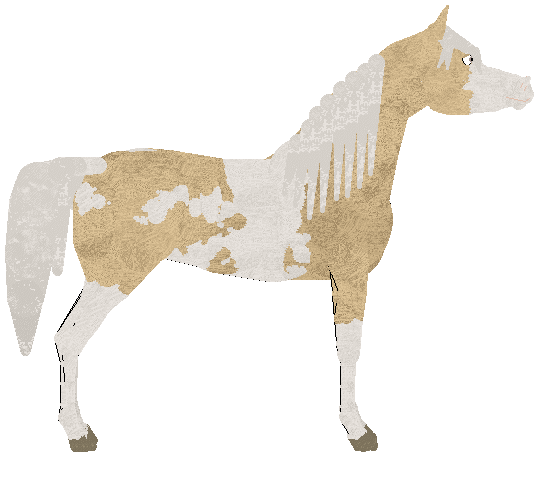 Eclaire is an example of where many people go wrong! Her eyes are slanted, however she does not look worried. This is not faulted! 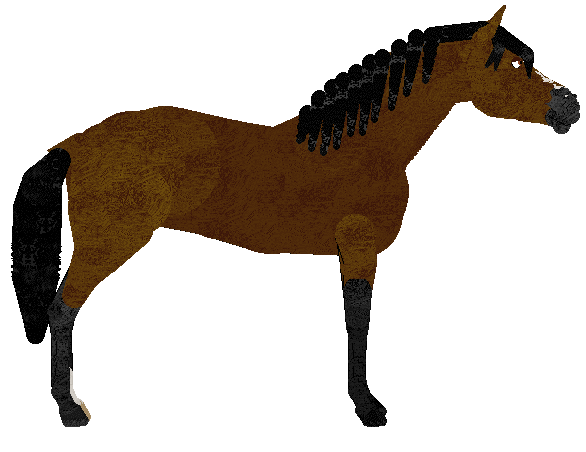 This is an example of sleepy eyes.

Here is a decent example of surprised eyes on a not-so-great halter-ish pose!

The reason tail is last on this list is because it is only to be used as a tiebreaker. If you have two different horses in a show with exactly the same pose except one has a swishing tail, the swishing tail would be placed lower. Otherwise, if a pose is perfect in every other way, a swishing tail is ignored and the horse will likely win unless a non-swishing horse comes along! 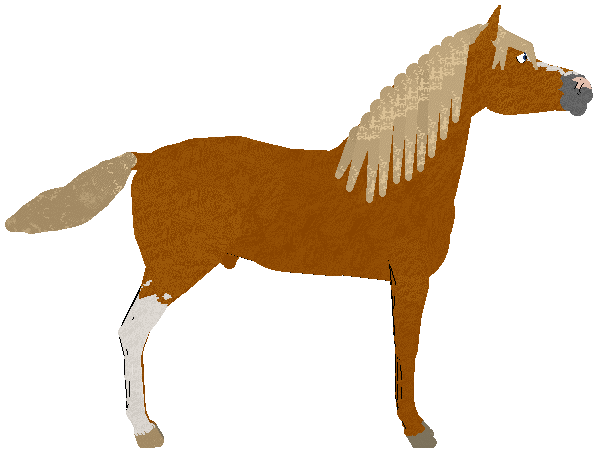 After looking at all of this, here are the questions to ask yourself!
Is the horse level? Can you draw a straight line under the hooves?
Is the body straight? Is the body shading consistent? Are the legs aligned?
Is the head straight? Can you see the left point of the forelock?
Are the ears aligned? Can you see the left ear?
Are the eyes good? Are they worried, sleepy, angry, or surprised?
Is the tail swishing? Is the pose good enough that it will still place even with the swishing tail?