Jumping, like Halter, is all about the pose, except in this type of show you have three: the take off, the jump and the landing. You need to look for different things for each pose, both when you're judging and when you're posing your own horses for entries.

On this, you want to make sure it's the right kind of take off. You want them to be in the first "beat" of it; here's what I mean. 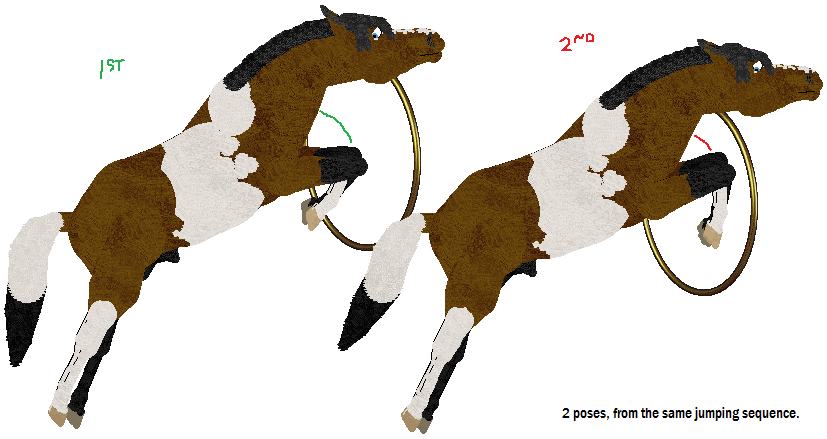 Lovecraft made a great image for this. This is the same horse jumping in sequence - the first picture is what you want them to post. The horse is at a good angle, the legs are up nice and square to the chest, and the ears are quite aligned.

Once you know it's the right take off sequence, you need to look at the head. Are the ears aligned? If the ears are aligned, then you know the head and body are straight, even if you can't see space between the back legs. Horses such as PSLs and Pasos have thicker legs so you won't see space, while horses such as Mak's ISH or Celestia's Appy their legs are hexed so they aren't as freeform and might be all over the place, like this pony: 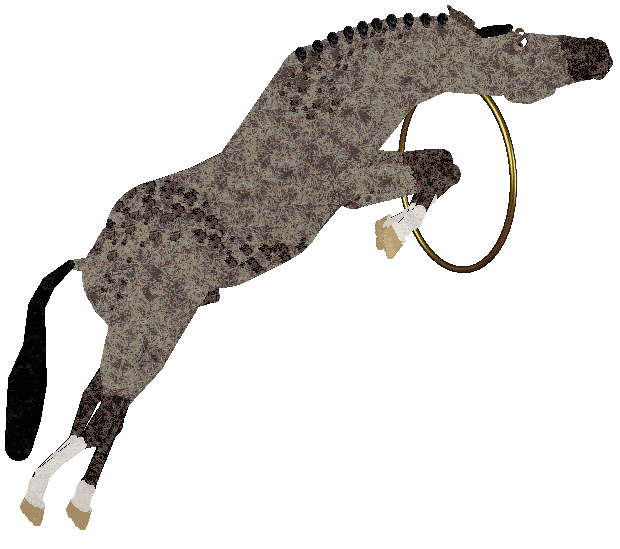 Another thing: some horses have BIG ear balls so it may look like the ears aren't aligned, when in actuality they are. Take the ISH up above; his ears are as perfect as they can be, even though the outline is a bit chunky. That's just how the file is. Almost all of the ISHs are like that; you'll just need to look closely and scrutinize a bit more with some of the wonky files. The horse above also sports those large earballs; his ears are aligned as they can be on this take off and should not be faulted.

Sometimes you'll also see the hoop IN FRONT of the horse; no big deal! Judge it just like you would any other take off; some mods refuse to go in front of the jump, no matter how hard you try. Some files just refuse to cooperate properly when it comes to jumping, and should not be faulted.

For this pose, you also want to make sure it's the right kind: You want the horse square over the jump, hind legs nice and tight, forelegs splayed a bit, head and ears straight and eye looking back at the jump, like this fellow:

^ This horse is just a beat too soon - see how he's not quite as level as the horse above? He's gathering himself to get over the jump.

^ This guy is a beat too late - he's already adjusting for his landing and doesn't have that nice tucked in look of the correct jumping sequence.

Sometimes you'll run into a horse that has the hoop in front of him; just like the take off, this is fine.

The things to look for are: the ears, nice and straight like the horse above, though some files will look like this: 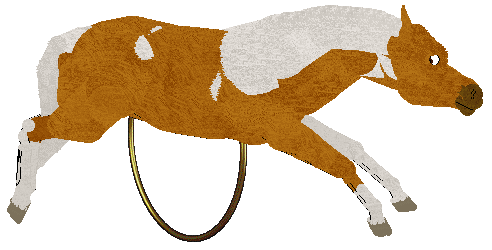 They have a slight line behind the aligned ears, because the pony files are so small, they don't align as perfectly as the bigger files. It shouldn't be faulted, it's just a quirk of modding. Can't make everything perfect all the time!

If the head and ears are in line, then the rest of the body is too. I mainly just look at the head when jumping and make sure it's in the right sequence.

Just like on the take off, sometimes you'll see horses that have the weird back legs, which look like this: 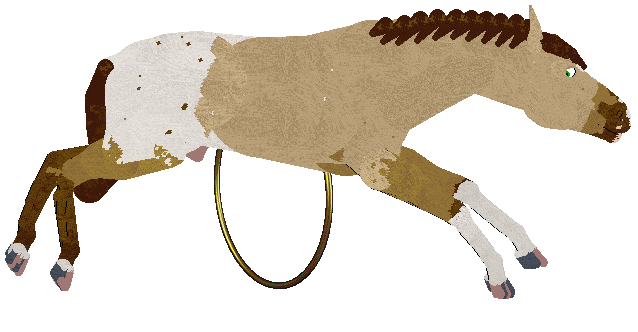 Again, as long as the horse is in the correct sequence, the hexed hind legs will follow in their correct path.

For the landing, you want the horse with its left foreleg on the ground, right one raised, hind feet nice and tight, head straight with its eye looking back at the jump. 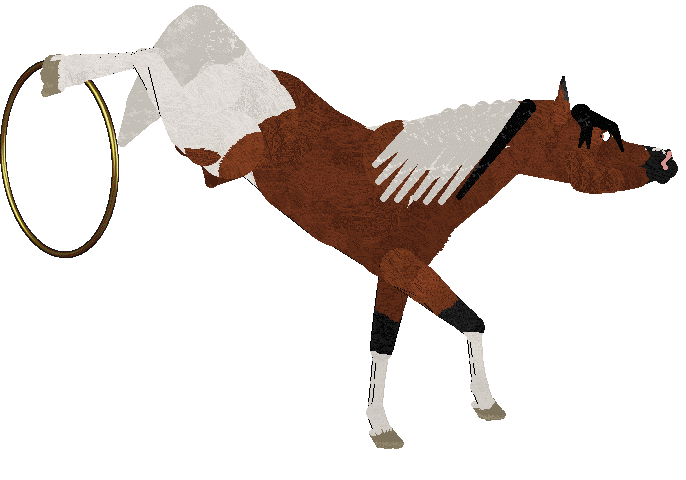 This is the wrong landing sequence:

While his left leg IS down, his right leg is coming down to help catch his weight and his hind feet are too high and loose.

And again, our leggy mods that aren't going to quite follow the rules: 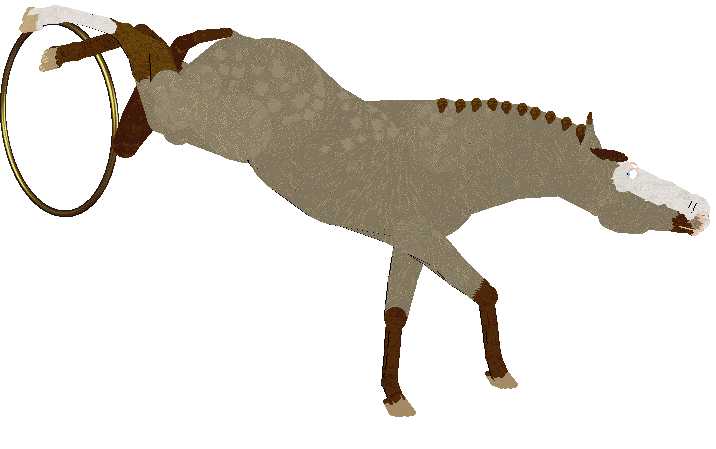 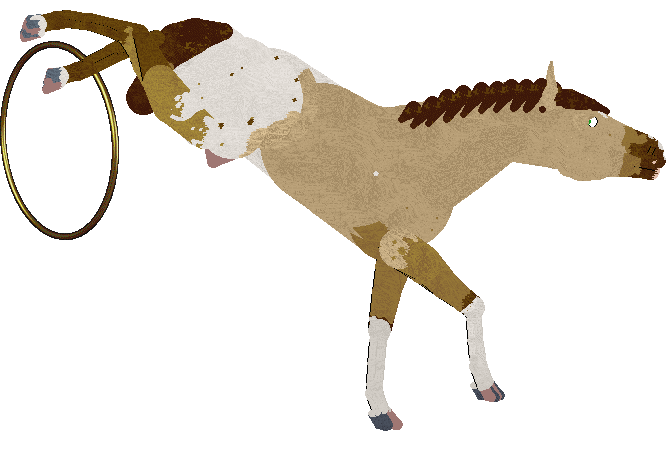 NOTICE: On the ISH's head, you'll see a big ball in front of the ear - that's normal! It's just part of the file's neck; the ears are aligned and so is everything else with this pose. The appy has a similar configuration with its mane balls. As long as the forelegs are in the correct position, the rest of the body will follow.

While some disciplines require additional or different poses for Advanced, Show Jumping does not. It's just the exact same thing as regular, but the competition is all more experienced.

Any poses that DO NOT use the silver or gold hoop as the jump (both are included in the Petz games) will be disqualified. This is because other jumps may obscure the pose and because judges use the placement of the hoops in relation to the horse's body to judge the pose.

NOTE: The hoop SHOULD NOT be moved once the horse starts jumping. Don't drop it or move it, just let the horse finish its jump and take lots of pictures! It should stay in place so that the horse is directly over it at the peak of the jump and the horse is in front of the hoop looking back at it in the landing. If the hoop is not in the right spot or is missing altogether, you can expect the pose to be faulted.

expressions will be heavily faulted. It can be harder to see these in the takeoff phase because the horse is so upright that the eyes and eylids are slanted, so just really take a close look at them. If you want more examples of the expressions, visit the general Disqualifications & Faults Guide.

Entering the wrong phase of the jump is usually pretty heavily faulted. I'll post examples below (all from the same horse) so it's easy to compare right and wrong phases.

This first pose is the one you're supposed to enter. 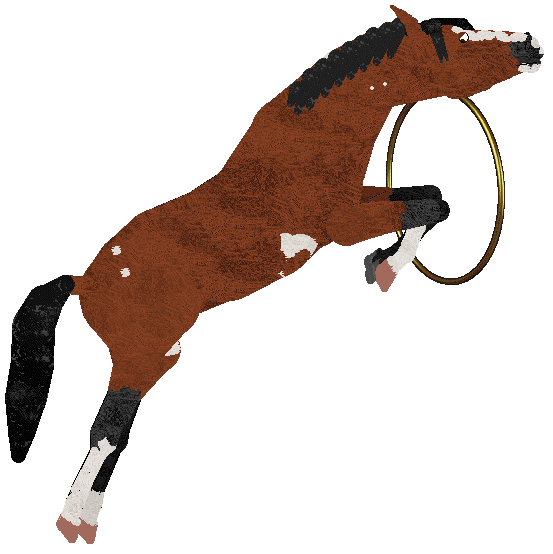 And this one is where some people get it wrong. They look similar but you'll notice that the ears are flatter, the hoop is behind the chest of the horse, and the front knees are held higher and closer to the chest and neck. 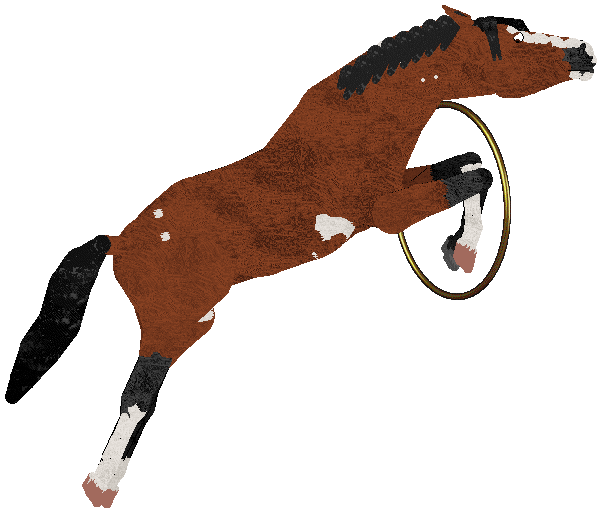 This first pose is the one you're supposed to enter. The hoop should be almost centered on the body between the front and back legs. 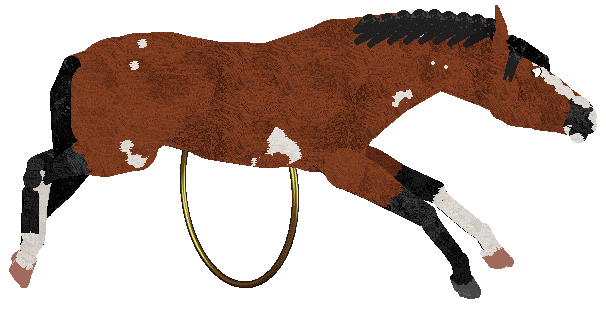 And the two below are taken either a bit too soon or a bit too late. See how the hoop is not directly in the middle of the body? 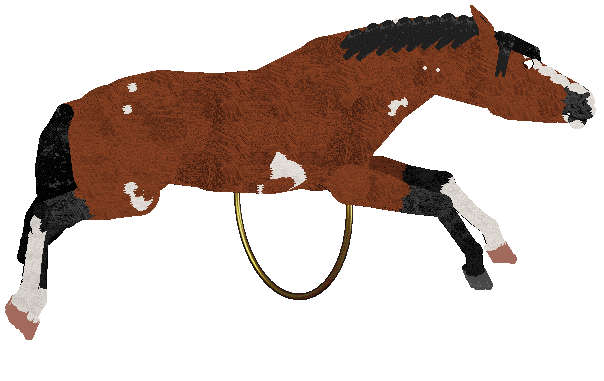 This first pose is the one you're supposed to enter. One foreleg should be on the ground with the other one still in the air and extended a little. The back legs should be close together. 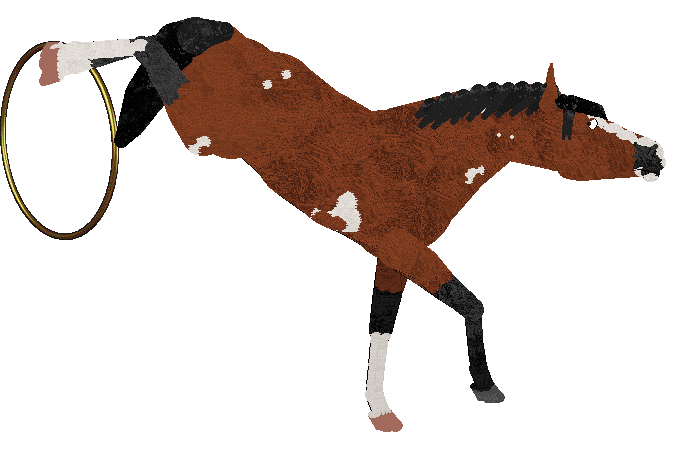 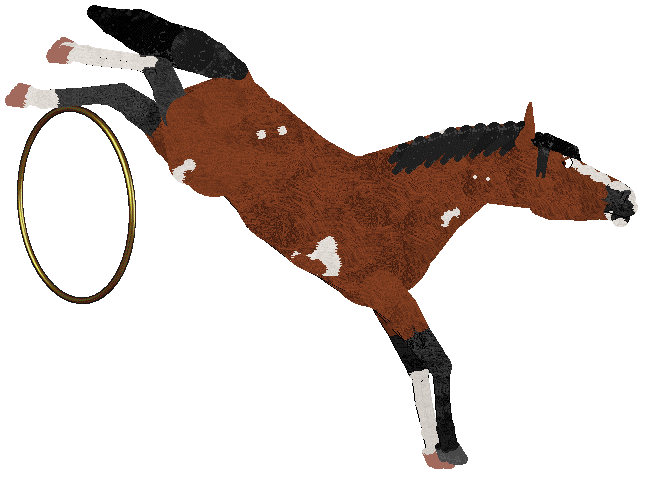 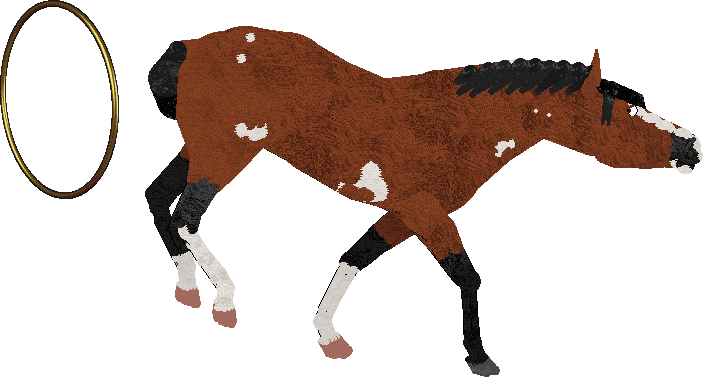