Combined Driving is a great discipline for ponies and minatures that can't be ridden, or drafts, or any horse that just has nice movement. It isn't hard but the official guide makes it look a little complicated. You can show your horse in Driving with very little effort as almost any pose is accepted and the fancy driving tack/carriage is optional!

Below is an example Driving entry for a single horse: 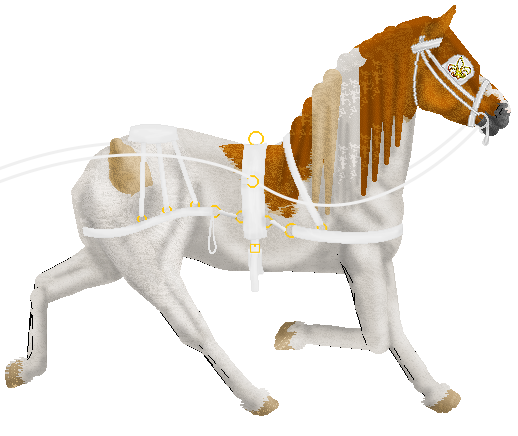 You just pick a nice pose and choose which skills your horse is great, good, and poor at. They must be great at one, good at one, and poor at another. Doing pairs and fours is slightly more complicated but a well-matched team (in terms of color and pose) looks amazing!

Here's an example of a nice pair, the horses are Ryder's and the edit was by Pollution. The horses are well-matched! 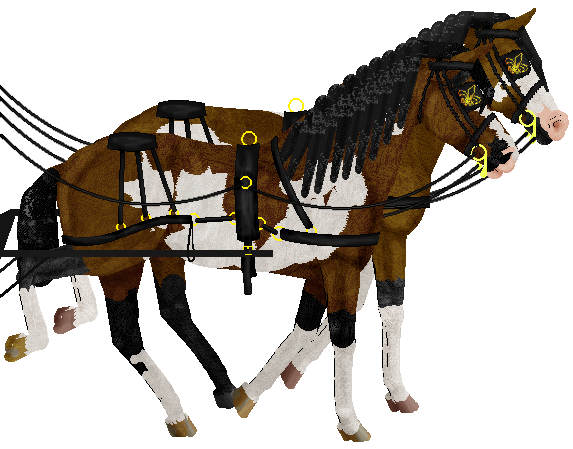 Below is the Official Guide by Ava

1. Combined Driving shows can be held as SINGLE or PAIR or FOUR-IN-HAND; it will be clearly stated in the title of the show.

2. One horse can be shown in all categories until gaining the Champion title; additionally, the horse may still compete as a filler in PAIRS/F-I-H, but its score will be divided by two (the other horse's score remains intact) - the points earned for placing go solely to the untitled horse(s).

3. Each horse has statistics that tell which phase of the driving competition it is best in (GREAT), good in (GOOD), and worst in (POOR). These traits remain unchanged throughout horse's whole career.

4. For each phase of the competition:

dice will be rolled. The score will consist of 2 even and 1 odd roll for each part, plus the bonus:

the even dice indicate the cleared obstacles and good time, the odd - faults made.

5. Scores from all three phases will be summed up to get the final result.

6. Ties will be judged based on the total score in the POOR phase:

if the scores are even, the total score of the GOOD phase will be looked at; the higher pointed horse wins;
in the case of Pairs and FIH, the scores will be added for every horse competing.

7. Horses in pairs/fours can complement their weaknesses (great+poor) or rely on domineering one phase (great+great), it can be a mix of both (good/good, poor/great, great/poor).

8. Horses in PAIRS or F-I-H should be as similar as possible in height, body type, colour, and movement.

9. The judge is able to award entries by adding bonus points to the DRESSAGE phase. This is absolutely voluntary and marks an excellence in posing the horse or matching a team.
Max bonus points are : 2 for Single, 3 for Pair, 4 for F-I-H.
Bonus is added to the team's dressage total score.

10. As this is a random-judged show, the judge may enter their own team; however, in such case the bonus must not be added!

11. The pose (ONE PER HORSE) can be edited by adding tack, highlightening, adding outlines, eyeshines etc. Poses must not be further modified (no editing of the horse position itself).
For PAIRS/F-I-H, poses can be merged together into one image.

Good quality gaits are preferred over halt poses, however, pose quality doesn't have a very large effect on the final score, so it's not anything to really worry about.